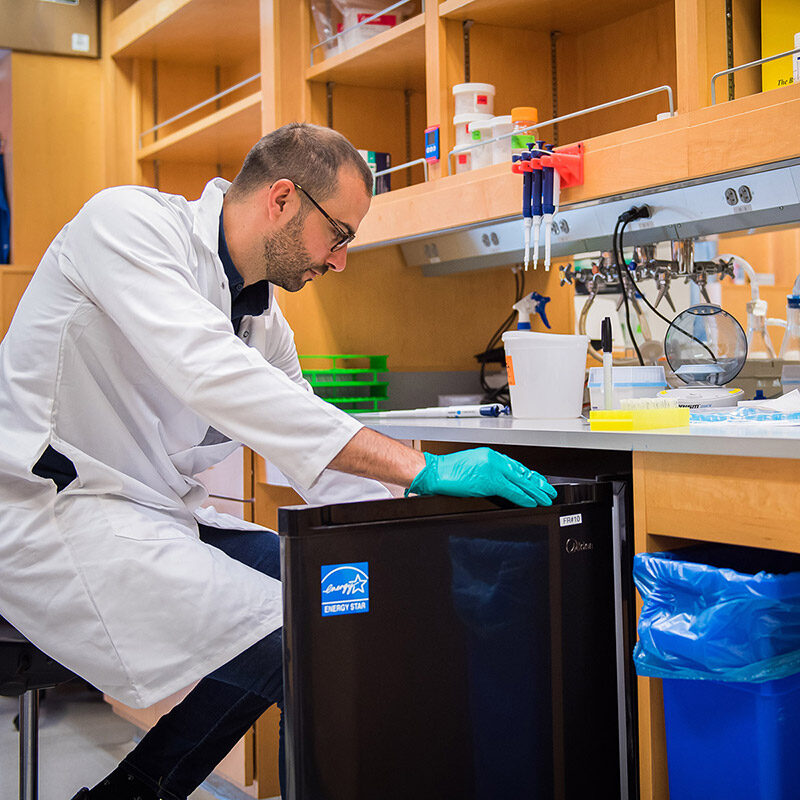 The University of California contributes to understanding and solving global climate disruption and other sustainability challenges through research, teaching and public service.

The University of California’s research enterprise examines many sustainability challenges, including several related to climate change.

Accelerating the most promising climate solutions

The California Collaborative for Climate Change Solutions (C4S), currently led by UC principal investigators, has established a consortium of multidisciplinary researchers from California’s private and public academic institutions, with the aim of accelerating the most promising climate solutions on the state, national and global levels. Funded projects associated with C4S total $12.4 million to date.

Since 2019, the UC system has partnered with New Energy Nexus on the CalTestBed Initiative, an $11 million California Energy Commission-funded award to host clean energy entrepreneurs at UC energy testbed facilities.

Collaborative research across the University aims to address the state’s environmental and climate needs. The UC National Laboratory Fees Research Program prioritized wildfire-related research, investing $10.6 million in prevention and mitigation in projects like the following:

The UC Multicampus Research Programs and Initiatives funded research into the significant health effects of climate change and wildfire. One study found that the health effects of heatwaves increase women’s risk of preterm labor.

The 2019 State of California Budget Act appropriated $3 million to the California Environmental Protection Agency for two studies to inform ongoing state regulatory and policy processes to guide California’s path to carbon neutrality by 2045. The studies, conducted by the University of California, identify strategies to significantly reduce transportation-related fossil fuel demand and emissions.

In 2020, the UC Natural Reserve System continued to support research, including biodiversity research, and education despite pandemic shutdowns. This is especially important since much of the research is long term, including a 15-year effort to eradicate invasive annual grasses at McLaughlin Natural Reserve, or has long-term implications for sustainability, such as research into ecosystem health under the hotter, drier and shifted rainfall patterns expected under climate change.

Several NRS facilities were impacted by wildfires ignited by the unusual lightning storms in August 2020, further testing their resilience in a warming world.

Last year, the University of California created and unveiled many courses and resources on the pressing issue of climate change. Many of these initiatives were funded by UC’s Carbon Neutrality Initiative, which commits the University to carbon neutrality by 2025.

Bending the Curve: Climate Change Solutions is an online course that is now available to anyone in the public — from high school students to retired professionals — who are interested in solutions to the climate change crisis. The four-part series includes recorded lectures from 25 experts in climate science, social science, public health, policy, economics, energy technologies, super-pollutants and ecosystem management from across the UC system and elsewhere. This series builds on a course developed by UC San Diego’s Scripps Institution of Oceanography climate scientist Veerabhadran Ramanathan and faculty collaborators across the UC system and has been taught by five or more UC campuses each year since 2017.

A University of California Carbon Neutrality Initiative-funded network, with faculty from both UC and the California State University (CSU) system, launched a digital platform in November 2019 called UC-CSU NXTerra for climate educators. NXTerra produces, curates and delivers education resources on climate change, critical sustainability and climate justice to teachers of every discipline — from the arts and humanities to the human and social sciences and the natural sciences — with a vision of sharing resources to accelerate climate education and action in California and beyond.

The University of California and California State University systems are partnering to dramatically expand opportunities for students to learn about climate change and take part in effective solutions. The initiative aims to help more than 500,000 high school students each year to become literate in environmental and climate change issues and solutions. In 2019, more than 200 higher education leaders, prekindergarten through 10th-grade educators, researchers, policymakers and others gathered at UCLA to take part in the Environmental and Climate Change Literacy Project and Summit (ECCLPS). The UC Carbon Neutrality Initiative-funded meeting was held during the United Nations’ Climate Change Summit in Madrid, with the theme of “Today California, Tomorrow the World.”

Two UC San Diego scientists — Veerabhadran Ramanathan of the Scripps Institution of Oceanography and Wael Al-Delaimy of the School of Medicine — published an open-access book on climate and public health with Monsignor Marcelo Sánchez Sorondo of the Vatican’s Pontifical Academy of Sciences and with contributions from Stephen Hawking, former California Gov. Jerry Brown, four Nobel Laureates and others. Health of People, Health of Planet and Our Responsibility is a unique publication given the wide range of its contributors’ backgrounds. The global experts present climate change as an immediate threat to public health and call for rapid stabilization of the global climate system. 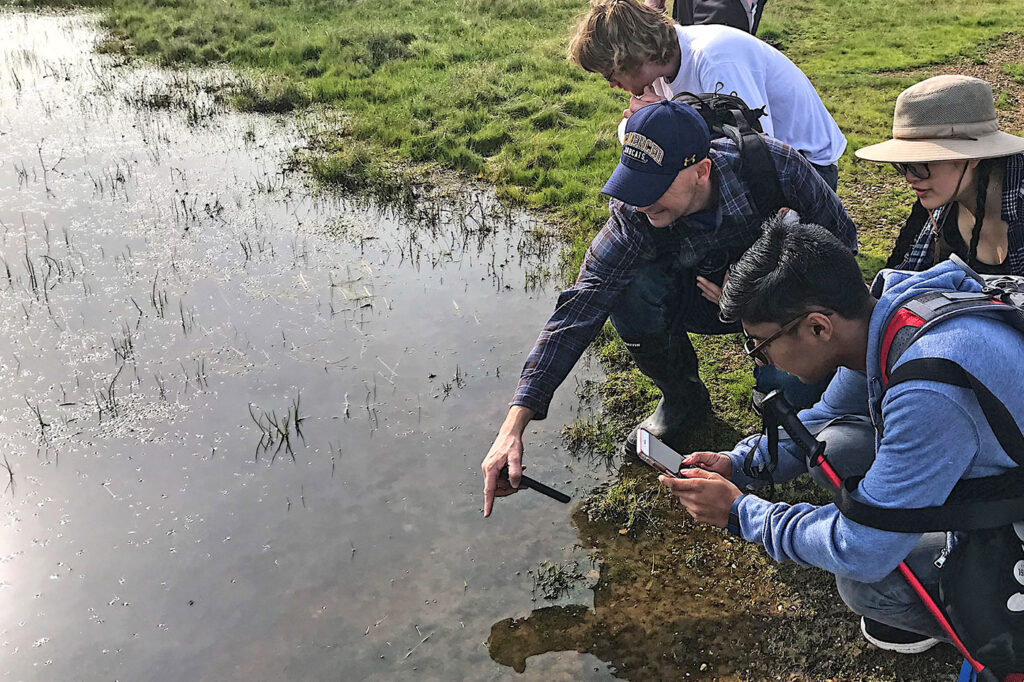 The University of California’s environmental sustainability goals have roots in student activism, beginning almost 20 years ago when students encouraged the Regents to approve UC’s first green building and clean energy policy, which they did in 2003. A selection of students’ systemwide work and awards in environmental sustainability is featured throughout this year’s report.

The UC President’s Bonnie Reiss Carbon Neutrality Initiative (CNI) Student Fellowship Program funds student-generated projects that support the UC system’s goal to produce zero-net greenhouse gas emissions by 2025. Thirty-five students received fellowships in 2020, for research into various topic areas, including the carbon sequestration potential of compost, anaerobic digestion, carbon offsets and the replacement of outdated incubators with energy-efficient ones. Other fellows organized events and communications to increase the engagement of students on their campuses in UC’s carbon neutrality efforts.

Students across the system inspired a new University policy committing to phasing out the use of single-use plastics. The student organization CALPIRG’s Plastic-Free Seas Campaign collected more than 12,000 student signatures and sponsored resolutions with the UC Student Association and local student governments to support phasing out nonessential, single-use plastic on all UC campuses. Students worked with campus leaders to go beyond this minimum systemwide policy at UC Berkeley, which committed to eliminating all nonessential single-use plastics by 2030, and at UCLA, which adopted an accelerated timeline for the phaseout.

The Doris Duke Charitable Foundation awarded renewed funding for the Doris Duke Conservation Scholars Program at UC Santa Cruz with a grant of $2.63 million over the next four years. The program was established with an initial four-year grant in 2015 with the goal of diversifying the conservation field. Each year, the program recruits 20 early-career college students to participate in two years of experiential training in field research and conservation leadership. The scholars represent a diverse spectrum of cultures and backgrounds, which helps to cultivate an inclusive and rewarding experience, according to the program’s faculty director Erika Zavaleta, a professor of ecology and evolutionary biology.

The U.S. Environmental Protection Agency (EPA) awarded People, Prosperity and the Planet (P3) Student Design Competition grants to student teams from UC Berkeley and UC Riverside. The two UC campuses were among only 18 nationally selected by the EPA to receive a P3 grant. Each student team received a Phase I grant of up to $25,000 to develop their sustainable designs that will help solve important environmental and public health challenges.

The University of California’s Academic Senate carries out shared governance responsibilities established by the Regents and relating to academic matters.

At its November 2019 meeting, the Academic Council, the administrative arm of the Assembly of the Academic Senate, endorsed three recommendations to guide the University’s response to the climate change challenge:

These principles ultimately call on the Academic Senate to mobilize faculty support for the University’s carbon neutrality and de-carbonization initiatives and objectives, and to show educational and technological leadership on the existential threat of climate change.

On July 20, 2020, UC San Diego’s Academic Senate voted to endorse a report from its task force on the climate crisis. The report included the statement of principles listed below, along with 34 recommended actions in the categories of decarbonization, teaching, research, and health and preparedness.

The statement of principles recommends the following actions for UC San Diego: